It’s Friday. I have been to my writing group for inspiration and coffee. This is my homework based on the prompts from the Storyworld cards John and Caitlin Matthews.. It was great to see the range of stories they inspire.

I had the Fairy Queen, Door to Fairyland and the Rainbow. 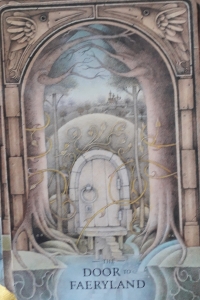 The art gallery heaved with the people as they hustled and pushed to catch a glimpse of the rare pieces from the long anticipated ‘Faeries of du Pre’ exhibition. Robert decided this would offer the ideal opportunity to fulfil his initiation in the gang. The others loitered opposite a few yards away, watching his every move, egging him on. He could not back out now. He took a deep breath and hood up, face down he weaved through the crowd, clutching his skateboard tight. It was this which brought him to the attention of Raz and his posse. There were plenty of shadows at the skate park where they could drink, smoke and plot schemes; one requiring someone small, quick and innocent looking. Someone like him. He would skate to escape the depressive atmosphere at home, and the anger of his stepfather. Once he let his guard down, the mismatch of personalities in the gang became his friends and family. Stealing a purse was a small price to pay for the protection and sense of belonging they gave even if seeds of doubt grew daily demanding he changed paths. He could enter the building, grab a bag and slip out unnoticed.

The atmosphere buzzed with excitement as people studied the framed collection consisting of sketches of elegant, ethereal beings, watercolours of streams, woodlands and Yorkshire landscapes A quick glance around and he saw his quarry. On a bench facing a large oil painting sat a dowdy old lady alone with her open handbag beside her. She was as still as statue; her focus fixed on the star of the exhibition; a painting titled The Queen of Elphame. Perfect. He had heard of the painting, everyone had. It captivated a legion of fans worldwide following its discovery in an attic in the village of Cottingley. Articles emerged delving into the history of the legendary artist, Jacques du Pre and theories of who inspired the vivid, unique masterpiece. His mistress or his imagination fuelled by obsession with the supernatural which led to his drunken downfall. Some believed it was the queen of the fairies herself after the accompanying old diary revealed he visited the area during the time of the faked fairy photograph furore. An explosion of merchandise followed – mugs, posters, postcards and bags. It was hard to escape her presence. Everyone was enthralled by the image except him. It was just a painting.

To his surprise as his hand hovered over the bag, its owner turned and placed her wrinkled, hand over his. “ I did …” he began to defend himself.

“Hush” she whispered her gaze returning to the painting. “Just watch.”

In silence, he became immersed in the landscape created by the artist. Snippets of conversation discussing brush strokes, composition and use of colour drifted by unnoticed as he studied the painted figure. Suspended mid-flight over the rippling stream, the royal fairy demanded attention from her subjects hidden in the trees and grass. Her large iridescent wings shone in the moonlight. A dragonfly fluttered in the corner, materialising from the bull rushes gently swaying in an unseen breeze. It zipped across to the other side of the canvas before disappearing into the distance. People glanced at the picture, but no one commented before walking away to the next piece. Robert glanced at the woman who smiled, and her age slipped away as he saw the woman she was in her youth in her sparkling eyes.

“They look but they do not see” she murmured.

Instinctively, he reached for his phone. No one would believe this unless he videoed it. It could go viral. She grasped his hand and shook her head. He put it back in his pocket and sat down. Together they watched a bird fly from the tree to the Queen’s unfurled hand to peck seeds before flying back. He ignored his vibrating phone as time flew by.
The visitor numbers decreased as it darkened outside until it was only the odd couple sitting on the bench. The loud footsteps of the curator echoed in the cavernous room as he warned them the gallery was closing in 15 minutes. They nodded and watched him walk away.

The woman stood and approached the canvas. Robert’s mouth dropped open as the Queen bent down and reached her hand for frail lady to grasp. The hands met: reality and paint blended until there were two people on the canvas. Alone he wiped away a tear as he watched the magic fade. He stepped closer, touched the old lady’s hand, the wrinkles had smoothed, and she looked younger. A smile formed on her face and her fingers wrapped round his.
The investigation into the disappearance of Robert Jones and Gladys Stone arrived at no conclusion with only the abandoned skateboard and bag on the bench connecting the two strangers. No one saw the two additional figures walking in the trees.

View all posts by kakenzieblog

This site uses Akismet to reduce spam. Learn how your comment data is processed.